If we still consider, as I did when I started to write this, TF2 to be the videogame grand-daddy of videogame storytelling and Overwatch the "new and bold" direction said storytelling takes then we can now safely say that both of them...
...Er, has failed miserably. 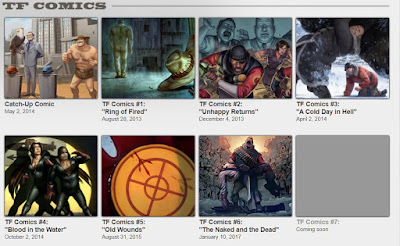 One might say it has to do with the companies themselves. Valve is not a company known for finishing anything and Blizzard has their, let us say unfortunate, partnership with Activision to deal with. My own take on the matter is that when it comes to overarching stories in an ongoing online experience neither game developers nor customers are interested in this type of storytelling anymore.
I can chalk this up to a few reasons. For game creators it may turn out that a story may limit what can be done in-game, or create inconsistencies. Likewise Valve may not simply be interested in creating content for a game that is more or less in maintainience mode right now.

The newer, modern multiplayer experiences I play right now such as Mordhau and Deep Rock Galactic seem to favor a strong narrative foundation where the only real changes are the updates.

The foundation here being different factions fighting in medieval times...

...or dwarves wirking for an interstellar mining corporation. Note however how the update video do play a small narrative part in introducing "newly discovered monstrosities" to the game.

However since the original fifth and final part where supposed to be about the ongoing stories of Team Fortress 2 and Overwatch, I guess I should take a bit of time to talk about them. Team Fortress 2 had an angoing comic series in originally six and then seven parts (the seventh part is still to be made) that details the defeat of Gray Mann and the hunt for the last of the Australium on Earth, which the Administrator of the Team (RED and BLU have been retconned into a single team called Team Fortress) wants for some reason. There was also a movie with an update but it was more of a comedic short showcasing the level rather than something that was made to move the story forward.

Overwatch has just continued to introduce new characters and hint at some vague future conflict between the newly recalled Overwatch and the terrorist organization Talon. If I would hazard a guess I bet that if Blizzard could go back in time they would just use the Overwatch vs Talon battle as a framework for the game and then just keep introducing characters and character-tied comics since that is so clearly what they want to do.


So where does this leave a indie-developer that wants to create a narratively driven game? Well, I would say with the way the industry is moving right now keep the foundation strong and do not plot out a huge sprawling storyline over multiple games immediately. Keep your mind open and see where a single game of yours take you and your story. That is what I have learnt from working on this retrospective on online game narratives and my own game projects!
Upplagd av Erik Engström kl. 13:02