The use of the narrative curve in episodic games Pt 5 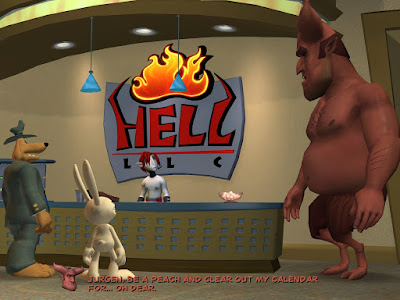 Well, calling the ending of the last episode a point of no return is a little bit much since despite literally going to Hell you fairly soon find a way back to the land of the living. After breaking into Hell and saving the souls of all their friends Sam and Max are confronted with the true antagonists of the season. The Soda Poppers.
Now, there are a couple of ways to react to this. I have heard it said that it was a way for Telltale to write unliked character out of the franchise. I have also heard the opposite view that Telltale was under the impression that the characters were well regarded and this was indeed meant to be a shocking twist. My chief complain is that there is no build-up to this at all (no, having them appear in every prior episode do not count as foreshadowing).
Anyway, the Soda Poppers are defeated in an overly convoluted time-travel joke that does sort of loosely tie into at least one of the prior episodes and everyone is saved. 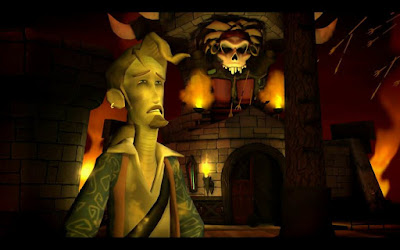 Rise of the pirate god

Hey, this one starts with the protagonist entering the afterlife too! And it actually works as a point of no return, since coming back to life is treated as a big deal and not at all a certainty. Indeed, one of the characters do end up dead permenantly so there are some actual stakes. After returning as first a ghost and than a zombie Guybrush fights Lechuck, now risen as a pirate god. As a small sidenote his design is kinda boring, since it is just his zombie form in matted colors and a dark brown glow that looks more like stink-lines than anything. The battle itself is great though, a classic Lechuck battle where Guybrush is chased around Lechuck´s ship and beaten up along the way.
This games also really sticks the landing with one last puzzle that ties down both emotionally and thematically instead of the lame "everybody laughs and go home" ending from Sam and Max. The only thing that spoils it is a real weird twist where it turns out the Voodoo Lady, a series mainstay, was evil or at least morally ambigous all along. It is better foreshadowed than the Soda Poppers, sure, but it really feels like the writers are painting themselves into a corner for no real reason. 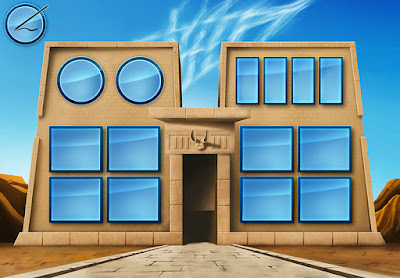 My own game never ended up getting that last episode written but the synopsis goes something like this. Adva escapes from Leechlock and finds the plant root, which can resurrect Alex. Now embued with a few new powers he and Adva can turn the tide against the demons and Leechlock. What I tried to learn from the above games was to avoid uneccesary twists. Everything have been set-up and now we just need to stick the landing. That said, it is perhaps a bit too straight-forward. The ending ended up being a rushed as well due to budget reasons. Also, the search for the root as a means of curing the couple´s fertility problem turned out a too complicated an issue for a game like this and ended up swept under the rug as the final battle approached.

So my analysis of episodic games comes to a close. I think the most important to take away from this is is to be consistent. Do not put in content that clashes with the rest of the game. Make sure that the characters stay focused on the end goal and cut of any uneccesary padding. The beauty of games as opposed to movies and books is that the story often is seen as better by the player if some things are left unexplained (as long as the gameplay is good).
Good examples of this are Ocarina of Time and Majoras Mask as opposed to the overly explained bird-based culture in Skyward Sword. If possible, try to have some sort of puzzle or section (but keep it simple!) after the main quest is over. This is one of the big advantages of games, letting players be a part of the conclusion. Rise of the pirate god and Earthbound handles this absolutely beautiful.

Liked this text? Use one of the buttons below to share. Thanks for reading!
Upplagd av Erik Engström kl. 08:37