We are now entering a sort of limbo-state, storywise, for both franchises. The early establishing of setting and personality of characters have been settled, so what to do when a update hits? The update era is an era in the middle of the two games developement where the story do not move forward at all but is rather closely connected to particular updates to the game. These kind of updates often have the sensation, some would say illusion, of forward momentum but in reality the story does not move forward. Also, theyoften have some kind of experimental gimmick to them. Studying this kind of writing can be useful for pure hype generation and making update pages more interesting. It can be likened to the instructions manuals of old that were often pure fluff, but also fondly remembered.

Team Fortress 2:
A good example of the things I have mentioned above for Team Fortress 2 is the engineer update, viewable here:
http://www.teamfortress.com/engineerupdate/v00.php


The background is that one hundred special golden wrenches were given out to random players all over the world during crafting of other items. For every 25 that was found a new part of the update was revealed. The page for the update started out as a collection of newspaper clippings about the established world and then replaced with the new weapons and maps of the updates.

It does seem like a real breathing character is working here, right?

Pure gameplay updates, but as they look like the clippings and blueprints from before they make sense from a character perspective.

Yet another example I want to bring up is the uber updates, one of the largest and most beloved updates of the game (although hated by some; the game went free to play at the same time).
http://www.teamfortress.com/uberupdate/day_01.html

This update combines a mafia-themed weapon set with a update page full of mugshots and mafia-slang. It continues into arabian style equipment and finally a "rousing speech" from the soldier along with his new weapons. This is topped off with the meet the medic video. These themes have no internal relation to each other, and only the soldier update page is really in character. The meet the medic video also does not further the story but does give some background about how the medigun was created.

Another comic example, and showcase of a few weapons and the Soldier´s demented personality.
http://www.teamfortress.com/grordborts/comic/

The overwatch likewise starts getting comics and videos closely tied to particular updates.

The video shows the first new character to be added to the game. It shows off her abilities and personality. Note in particular how the video takes place "in-game" both when it comes to the map and character models. This creates a greater sense of immersion.

http://comic.playoverwatch.com/en-us/junkrat-junkenstein
http://comic.playoverwatch.com/en-us/junkrat-the-return-of-junkenstein
This one is more story-driven but is solely confined to the yearly halloween event, takes place in the distant past and is probably not canon. Neverthless, I feel that this one is the one that most captures the spirit of the update it belongs to. I always say that the true test of if a character is great or not is dependent on if they can be transplanted into another setting and still work. This halloween reinterpretation of some of the cast really works.

Alex and Adva (my game) 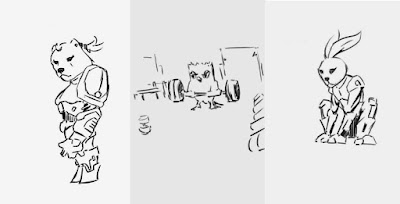 For my own game I have experimented with doing the absolute minimum when it comes to story with my updates. For example, when putting out a new patch for the demo I just put out the relevant info and some images with nothing else to go with it. Results where still positive, but audiences do crave that extra fluff and hype. As I am still not ready to commit to a larger overall story running alongside the game like I intended in the beginning. Instead I have settled down with a small incidental story about the characters for each patch. I think the update story model is the one for me, and indie-developers in general.

Some of the things I have been argued here may seem like a critique, but you could equally argue that this is a golden era of game storytelling. Not too much story to hog down the gameplay but just enough to seem the world seem moret than "just" a game. Next we will take a look at what happens when the series start to branch out and look for a purpose. Yet they cannot really find it, and some strange narrative pratfalls are had. Hope you will join me then!
Upplagd av Erik Engström kl. 08:54