Dauðra Dura (the doors of the dead)

His home village attacked by a giant ogre, driven from his home and out of options, a young rabbit heads for Helgafjell, the abode of the dead... 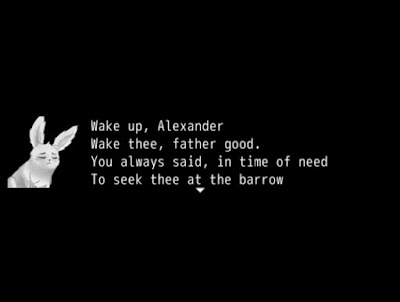 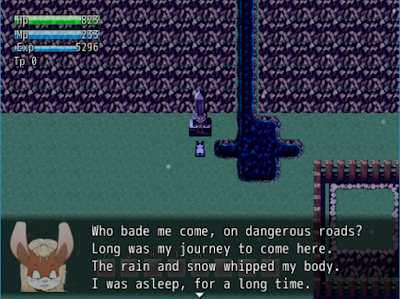 Once upon a time, there were no islands, no green grass, no life or trees. There were just a gigantic gap, with swirling icy waters below and fire in the sky. The fire and water coalesced to form Imert, the world giant. That is when four gods came to this land, and made the islands and the great continents from that same giant. One hurt his arm, one hurt her leg, one hurt his chest and one hurt her head. That is the story about how glorious Grangard came to be! The following story takes place in Grangard and concerns the child of two of Grangard's greatest heroes.

After having his hometown attacked by ogres Swiftdale has no other choice. He must go to Helgafjell, the abode of the dead and seek his father's magic. Will Swiftdale make it down from the cold mountain in time to stop the ogre king or will his bravery leave him, and the dead take him?

This is a short game I made for a contest last year. The challenge of the contest was to create a game with an interesting story that took place on a single map with only ten events (events being everything that "happens" in the game).
It is based on the norse poem Groagaldr where a young hero summons his mother from the dead, as she has instructed him to do in times of need, to learn her magic. The scenario is both macabre and strangely heartwarming and so I thought it would make a perfect fit for Alexander and one of his sons!
The game is only 10-12 minutes long and should be suitable for everybody to play. It is not really combat-focused (there are only two battles, one of them optional) but emphasizes exploration and using tools to overcome puzzles. The genre is suspense/horror and hopefully a good little character-building tale in the faraway land of norse myth!


A gameplay video of me playing the game from start to finish. You can also use this as a walkthrough if you get stuck!

It can be downloaded and played here:
https://forums.rpgmakerweb.com/index.php?threads/dau%C3%B0ra-dura-the-doors-of-the-dead-one-map-ten-events-entry.95784/
Upplagd av Erik Engström kl. 15:22