Designing a action-rpg using platformers as a template

Is there a overall principle that can be discovered when it comes to game creation, no matter what genre? It is my hope that this guide will work as a sort of workshop for building maps suitable to the genre, as I have not seen too many examples of pure game design discussion here on the forums. The guide is marked intermediate since it is meant for those rpgmaker users that have finished a few games and/or projects and want to try their hand at a new kind of level design. This guide will presume that you know all the terms related to the program and how it works.
Please note that is uses a few scripts that are unique to RPGmaker Ace and thus placed in this section of the forum. The core lesson of this tutorial should be useful for all makers, though.

Designing levels for a rpg/platforming game is, needless to say, different from a normal rpg. A map in a rpg can be boiled down to two main points:
1 Look realistic within the setting of the game, making the player a part of the world
2 Leading the player in the proper direction using clues and points of interest

A platformer (and by extension platformer rpgs) on the other hand can be boiled down to these two points:
1 Provide a clear challenge
2 Give the player the tools to overcome it
It is equally important to create a "flow" for the player (platformers) and make them imagine the world beyond what they actually see in the game (rpg:s).

The first thing to notice is that platformers do not strictly have the need to be realistic since all of its "rules" are action-based. That is why a platformer, but never a rpg, could convincibly be just a man jumping on squares floating in a void. That said a platformer/rpg still needs to adhere to realism much more than a platformer, but it is something to keep in mind.

Here is a good example from the Mario and Luigi series of games. 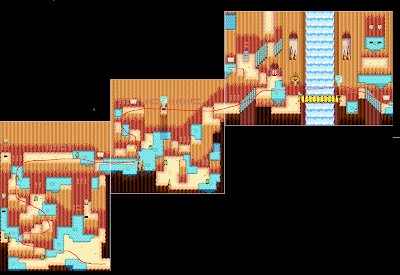 Possible paths for the player marked in red

This sure takes place in a "realistic" mountain region, but on looking closer we see a few discrepancies. The path to take is completely linear, and to traverse it you need abilities that only the main character have. What was the two points a platformer level has to do again?

A way to do a functional platformer/rpg map is to take a look at platformers and try to emulate it as much as possible. Let us do so now using the original level 1-1 from Super Mario Brothers on the NES. For the game I am currently working on I am using Galv´s Jumping Script and Pearls ABS Script (although I have disabled the ability to let the player have party members attack individually). These scripts are not something that you necessarily have to use to follow along, but for those familiar with the script it will be easier to visualise how the maps below function. For those that do not know the scripts the short version is that they allow player to jump and down ledges and attack monsters in real time. 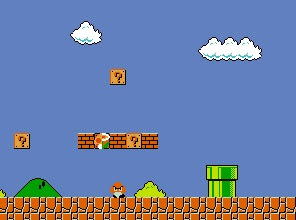 The game opens with a goomba and some boxes containing items that are beneficial to the player. Some are above ground to teach the player jumping help him or her get a feel for the environment. The first obstacle the player runs into in my map is a single enemy along with a chest to give some starting goodies. There are also ledges to practice jumping and teach the player to avoid enemies, just as Mario can by jumping over them. 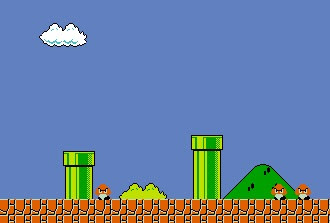 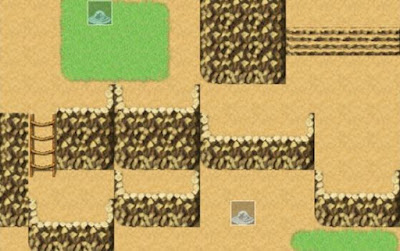 Next Mario encounters a few pipes and more goombas, teaching the player to jump and handle multiple enemies. For the next part of my own map I have added two more monsters and more ledges, along with a pit and a new way to travels the environment, ie ladders. 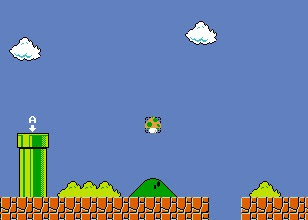 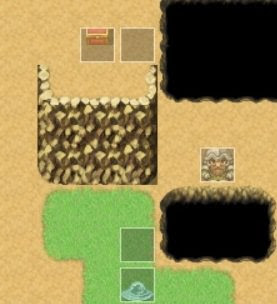 Beyond that Mario encounters the first secret of the game (a 1-up in a invinsible block) and the first pit, which kills even if he has a mushroom and thus requires extra caution. For my own game I had to think a bit outside the box since I had already introduced pits. Instead I have introduced a new shooting enemy along with a pit that can only be traversed using a hookshot (the events at either side of the pits). If the player chooses to continue upwards they will find a hidden treasure chest.

he next part of the level up to the halfway point mainly makes the player comfortable between choosing going down the ground or on top of the block. The last part of my map all the way to the checkpoint likewise has two roads for the player to take.

The next part does something very interesting. The player encounters a sort of well. The first one has a bottom but the next one a pit. In addition to helping the player navigate the level it also prepares the player for the last large staricase at the end. I wanted to make something similiar but in a large scale. Therefore the bottom level contains just about everything the rest of the mountain does (enemies, treasures, hazards etc) but closer to the checkpoint incase the player dies.

Finally there are some token challenges before Mario encounters the aforementioned staircase and can finish the level. The last part before the top of the mountain, where a boss is located in my map is a layer of bushes the player can cut down for items. There are also a few enemies. 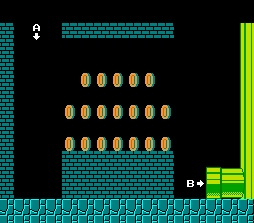 Something else that I wanted to discuss as an aside is the matter of secret areas. Sure, my map have a few hidden treasures chests tucked aside but one of the greatest joys, even in linear platforming games, is finding completely new areas. I have experimented with cave openings that can be opened with bombs that leads into completely linear minimaps that can contain trasures, boxes that can be broken to get items (and blow off some steam) as well as people that can act as either informants or shopkeepers, like in the original Zelda.

Are there any other aspects you´d like me to discuss concering making hybrid platform/rpgs incase I continue to make this into a series? Also, thoughts on how this tutorial and how it could be improved would be much appreciated! Thanks for reading.

Here are my two mountain maps in full, with red lines showing possible roads for the player to take: 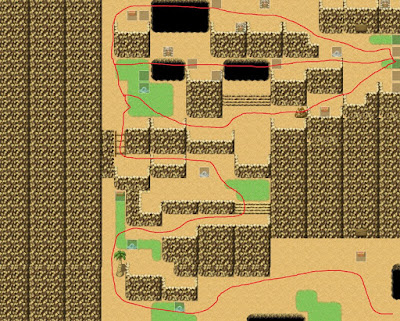 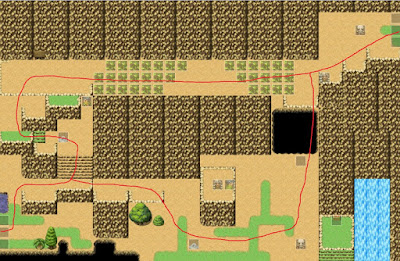 I decided to expand on this tutorial a bit, focusing on open-level collectathon platforming instead of linear ones. In many people´s opinion the Banjo-Kazooie series is the epitome of these sort of games and the one closest to the default rpgmaker engine is Grunty´s Revenge for the Game Boy Advance. In this tutorial we are going to study the first level of the game and try to recreate its strong points. Since this a completely new installment taking a different starting point I hope it is okay with the mods to make a new post rather than edit the OP? 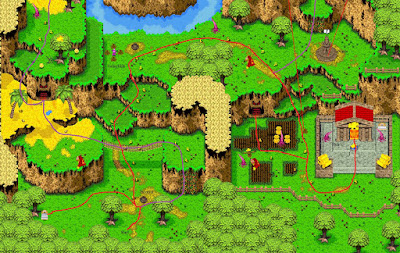 Here is the level in full. The player starts out at the lower left of the screen and follows the red line upwards. The first thing the player encounters is a tutorial. The player is told to collect notes to buy more moves and is thus encouraged to follow them. Note that the player may go to the left instead and find a beehive containing more health. Thus, the player is rewarded for exploring.

The player also sees part of the level they will visit later, piquing their curiosity. Following the notes the player soon finds their first collectible and enemy. This gives a first sense of danger but also reward, easing them into the adventure. Continuing to the right the player encounters a tip-giving oracle type character. The player can choose to give heed to these tips or not depending on how hard they want the game to be. There is also a climbable surface leading north, but the player cannot climb yet. Still, it hints at there being more things to come. 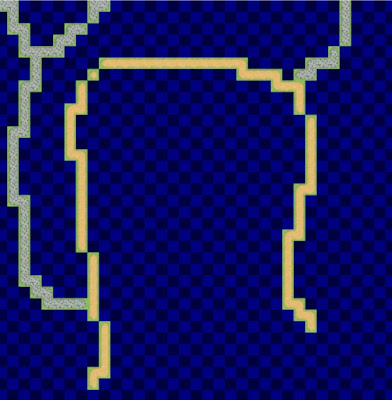 As a first measure I have marked out the road on my map. The sand road represent the red lines and the stone road the purple line the player can take later. The obstacles is bombable rocks, but the player does not get bombs until the first level. If the player talks to the dwarves they will be whisked off to another map for a cutscene detailing how to use bombs.

The game I am working does not really have collectibles, so the road itself represents the path the player is encouraged to say. That said, some small rewards are appropriate so I have added a treasure chest to the north. The oracle character of my game is an owl that flies in when the player spends a certain amount of time on the map. The part of the level they land on is marked with a circcle. The next parts are kinda self-explanatory. There are more enemies, as well as the temple hub and first level. A twist is that the road ends at a enemy and some scattered equipment, implying an attack. 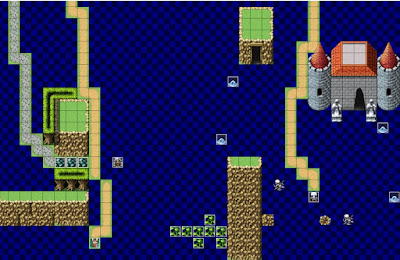 Finally, I have added a small reward for the player going offroad at the beginning in the form of bushes that can be cut down to find money and potions. The last part to be added are the roads leading further on and the second level, which should have a change of scenery. Also make sure that the player cannot access any of the areas prematurely!

Obviously the level still looks pretty ugly but then again it is only done design-wise. Now comes the substantional job of making the map seems like a real breathing world, but I am leaving that up to the experts! Thanks for reading. 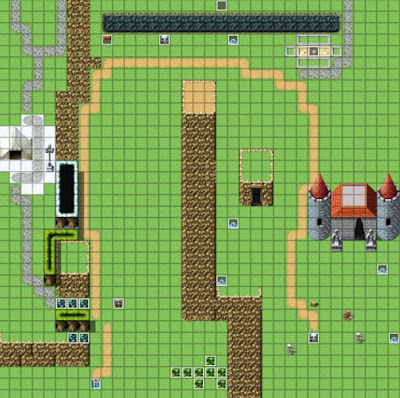