The use of the narrative curve in videogames pt4

Welcome to the penultimate chapter of my little analysis of the narrative curve in episodic games. Today we are going to take a look at the confrontation and the approuch of the climax that marks the high point of all stories. Let us proceed! 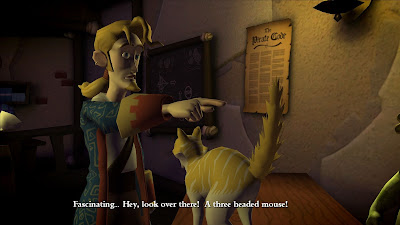 The trial and execution of Guybrush Threepwood opens with Guybrush returning to Flotsam island, having been captured by Morgan Le Flay. Originally delivered to Marquis De Singe he must instead stand trial before the citizens for his piraty crimes, as well as spreading the pox of Lechuck. After clearing himself of all charges he must find a way to find La Esponja Grande grow and absorb all the evil voodoo floating about. After accomplishing this Lechuck absorbs the voodoo, becoming a pirate god and kills Guybrush, ending the episode. The set-up for the confrontation here is pretty clear, although it does not come until the very end. What is interesting is what the developers probably hoped was the big climax of the episodes (and the series as a whole) namely that the voodoo lady is evil/morally ambigious. Honestly, it falls a little flat and will probably ensure that no further installments in the series are ever made. But speaking strictly narrative curve wise it does create a little mini-confrontation that manages to make the end of the episode come out more out of the left-field. 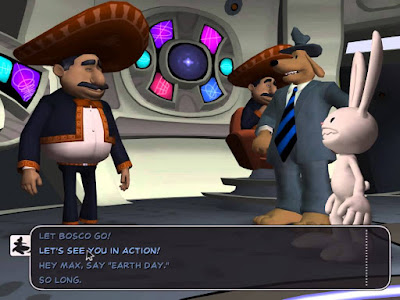 The chariot of the dogs begins with Sam and Max visiting resident paranoid loon Bosco and find him being kidnapped by a flying saucer (as well as turned into a cow). Using the flying saucer´s capabilities to travel in time they go through all the previous episodes to save Bosco and finally confront the owners of the saucer. Actually it is the same guy from the different points in time, a mariachi that sold his soul to the devil in order to be able to sing on everybodies birthday (whenever the word birthday were mentioned in a previous episode the mariachi would appear). The episode ends with Sam and Max shutting down the operation and entering Hell, taking the fight to ol Scratch himself. So in this episode we got a confrontation, the big reveal, as well as a point of no return in one big package. Is this not value for money!? No, not really. Since this episode is so cramped and contains so much that should have been in other episodes the end product feels really confusing. It does not help that the old early Telltale style of reusing assets really goes into overdrive as you literally revisit places from former episodes.

In the penultimate chapter of my story about Alex and Adva the couple arrives at the capital of the underworld, New Hades, and find it beset by demons. After clearing up they arrive at the pylon where the magical plant they are seeking grows. Here they find out how are behind the attack, two demons called Snotgut and Leechlock. Snotgut was encountered in the previous chapter and thought to be a low level thug. Leechlock murders Alex (in a twist I fully admit having stolen from the Monkey Island episode above) and defeats Adva in combat. The initial confrontation resulting in a loss for our heroes, the stage is set for comeback! Actually the confrontation part of my game did not change that much from my initial draft, so it seems like this is the one thing I got right! The only major difference is that in my first story draft Leechlock was literally the devil (kinda like in Sam and Max, funnily enough). I decided that the christian devil appearing in an original mythos did not make much sense and may be seen as disrespectful, so I changed it.

All that remains is the climax and the resolution, so that is what we will look at in the last installment. How do the episode handle final battles and what comes after? Very interesting, expecially as videogames are concerned the resolution mostly takes place in ending cutscenes. If you have been with me so far, I sincerely thank you.
Upplagd av Erik Engström kl. 05:08