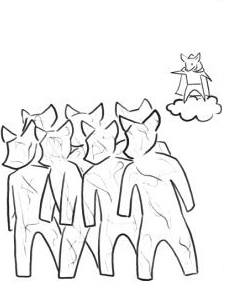 The fox god Ra-Ch raising an army of golems


The existence of the Golden City, in the midst of the celestial realm of Ra-Ch Firecrowned the fox god, was a stone cold truth in the mind of جعفراليعقوب
That is not to say that he worshiped the fox god or was in any way involved with the religion. It was just that Jakob (as his given name would be pronounced by the people of the land he inhabited) treated the galaxy-spanning city where all the people of the four faiths were given asylum as a researcher would treat the ocean. Something well worth exploring, yes, and the giver of all life to boot but ultimately not something that could even be begun to explored with our current capabilities.

Jakob had often heard his father and uncle discuss about what the city actually looked like, which he always found ridiculous. A city 12 light-years squared was impossible, or else housing nothing but the fox god and no actual souls. The material used to build it would have to be completely alien to our earthly bodies, the law of physics completely different in a world where such a city could exist.
In the same way Jakob´s father and uncle probably found him a typical wishy-washy symbolically-fetish reading liberal. If the holy texts mentioned a galaxy-wide golden city where the fox god ruled on a great white throne that was obviously what you were supposed to picture.

The night before our story starts was filled with strange whooshing noises and soft siren sounds. The few sailors that were awake said it heralded a coming storm, and in this they were both 100% right and 100% wrong.
The day when our story starts Jacob was gathered with most of the rest of the town and even a few المعراج in the town square. It was, after all, not every day aliens landed and desecrated the tallest praying tower. Instead of the usual rounded orange-golden dome the top of the tower had now been remade with some sort of inscrutable technology into the likeness of of a tall and cone-shaped gaunt face. It wore a crown, the leader of the aliens. Jakob rather thought it looked like a human, another strange species that came into port sometimes. They came by the sea, though, not through the air.
Other species his father had told him about was lambs, goats, owls, Behemoths, Falaks, Kujatas, djinnis, giants, الشياطين and الملائكة, dragons, rocs and a few other things. Jakob did not know if all of them existed, though.

The aliens had taken a few people of the port town into the newly renovated tower to discuss life on the planet, among them Jakob´s uncle. The younger people, like Jakob and his friends, were told to stay outside. Like all young people told to stay outside when something interesting finally broke up the monotony of their life they did not like it.
“I think we should just walk in” said Boc, as usual oblivious to the his numerous admirers his round shape gave him among the المعراج of the city.
“My parents probably read enough books to know how dangerous aliens can be!”
“Mmmhmm” Yusuf agreed, twirling the little moustache he had cultivated since puberty.
“They should heed the advice of younger people too, of nothing else!”
“Well, let´s not just sit here and talk about it ”Lechar, the last member and only female of the group added.
“Let´s DO something!”
“That is what you always say” Jakob sulked.
“Yet we always end up sitting around...”
In response to this Lechar yanked Jakob by the shoulder and dragged him down the street, sending electrifying fire first up to his head and then down his stomach.
“Look at that tower!” She sulked, arranging her black hair which the wind had blown about.
“You have to promise me that we will go there at least once before the aliens leave!”
Jakob was sorely tempted to say that even under normal circumstances she would not be allowed into the praying tower anyway but decided to say nothing.
“I don´t think they intend to leave...” he simply replied.

That night the whole family had gathered, eager to hear what these strange visitors actually wanted. Jakob´s uncle shook his head. He prided himself on being a man of great intelligent, but it was obvious that most of what they had discussed went over his head.
But the main point of contention seemed to be that the aliens were scientists, anthropologists, looking for primitive species that had a religious explanation for the creation of the universe that was similar to what their science had discovered. The reason for this was that the theory of the aliens were quite controversial, even out in the intergalactic universities and centers of research.
Furthermore, religion still had a strong hold of the political space sphere and thus it would be simpler for them to receive grants if they could find a religion that suited their theories and make that one dominant.

So Jakob´s uncle had told them about how the fox god, Ra-Ch Firecrowned, had moved over the surface of the chaos below and made the world. The aliens nodded. Their own theory of how the universe had come to be was all about speed. Speed of all kind was how the alien society gathered their energy, their currency when stored and even their symbol for life itself. Time had always existed, but it had not always moved.
Once it had, energy and all that other stuff (such as life) had soon followed. By reaching higher and higher speed the aliens could manipulate the world more and more. At least that is how Jacob´s uncle explained it.

Seeing as it was quite late, the gathered family decided to sing the traditional hymn of Ra-Ch´s golden city and then go to bed.Jakob just mumbled along, looking at the alien-infested tower and imagined Lechar walking through its gates.

Now that the aliens had pretty much fully integrated into the society of the Ezîrat al-Tennyn port town, Jakob and his buddies were bored and quite angry about the aliens only ever letting adults into their base. Strict religious upbringing or not, Jakob and his group of friends were as full of pranks and mischief as everybody else their age.
Upplagd av Erik Engström kl. 08:27