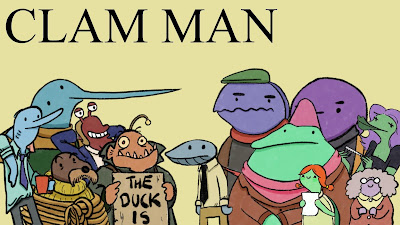 An absurd, strange, and hilarious underwater adventure featuring THE Clam Man, duck, nasty drinks, and the horrifying reality of mayonnaise crime.
This is the story of a man, recently promoted to junior sales representative, enjoying the comforts and leisure of lower-mid-level office work. However, things suddenly take a turn for the worse, and the Clam Man is cast into an adventure full of danger, suspicion, and mystery. Join him, as he unravels the conspiracy behind the tragic event that befalls him, and fight to restore CLAMMY JUSTICE to the world of Snacky Bay.

Snacky Bay is a mid-sized underwater community located under the water. Our prime exports are artisan sandbags, the musical group The Cuttleboys, and of course, SNACKY BAY PRIME MAYONNAISE. Whether you've come to see some of our famous landmarks, (like that one really big building and the fountain outside the really big building) visit one of our famous museums, (The Contemporary Cart Museum features some of the finest modern carts of all time, including golf, go, shopping, and horse!) or perhaps sample some of the local cuisine, (Mama Bass gave me horrible diarrhea. It sucked, but my brother went there too and he was fine, so I guess it could still be good. The Beefy Reef is pretty decent too.) you can be sure that SNACKY BAY is the one location you won't want to miss out on for your next vacation!

This is an old-school point and click adventure game that was released a couple of days ago after a succesful indiegogo campaign about half a year back (I even seem to remember someone posting here on facepunch about it). While I absolutely want to encourage anyone willing to create an adventure game I have a particular fondness for the protagonist and his predicament. I was actually fired from my job from my job awhile back in the same "Oh hey we are downsizing, have your desk cleaned out by lunch-time" manner and the game pretty much captures perfectly how that felt like. 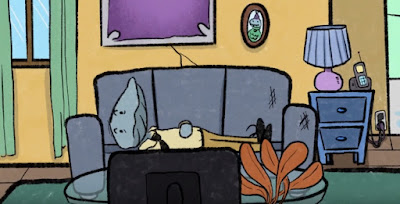 I haven´t played through the whole game yet (three hours in and I think I am nearing the end) but I have really enjoyed it and at least the steam reviews have been positive. The gameplay is a bit different from other point and click games in that it takes time to set-up clam man and his situation, almost playing a bit like a visual novel before developing into the usual puzzle fare of point and click games. The inventory is also rather unusual in that it never grows into the large amount of stuff you usually collect, so inventory management puzzles are completely absent, as is combining items (with one or two exceptions). The humor is pretty low-key but very funny, ranging from everything to absurdism without a clear joke to stupid puns.

If you could not tell by now I am also one of the backers, so there is also a cameo from Byleif in the game (in the form of a statue)! 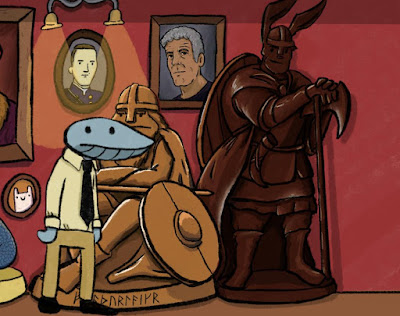