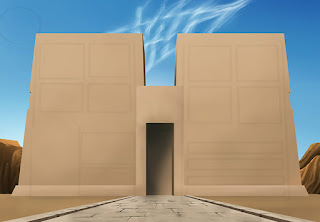 When creating a videogame it is important to make the interface as clear as possible, and that goes doubly for an inventory in a point and click adventure game. My goal was to create the entire interface in a single screen and make it work without any gimmicks while still giving a fresh breath to the adventure game genre.
The interface is found with a press of the I button, scribbled on the side of an egyptian pylon. There is a day and a night version depending on if Alex and Adva is in the underworld or not.
It is divided into two categories, each one further divided into two subcategories. The category to the left is the clickable objects. It is the part of the screen the players eyes will be drawn to first and contains all the items gathered during the chapter as well as buttons to change between Alex and Adva. At the top left there is also a button to receive a hint on what to do next.

The section to the right is the notes. Here you can find a list of the creatures that Adva needs to defeat or find as well as notes that will point you towards a puzzle. Alex can use these notes in conversations with characters in the game to reveal further clues.

Instead of getting in a situation where the player has to use all their objects on everything in a desperate attempt to get further into the game I want the player to look at this scene as little as possible. All items are automatically used when the player character is in the right place and the found notes are added to all conversations as soon as they are found. The goal I strive for is for the player to just bring this scene up once when they load a saved game in order to look over their progression and immediate goals!
Upplagd av Erik Engström kl. 12:39