The use of the narrative curve in videogames pt3

I have posted these little analyses on a few different sites and a thing that came up was wether or not episodic gaming was applicable to the narrative curve at all or if they should be measured in another way. While I do agree that games have to make allowances for the simple fact that games focus on action and tends to have more focus on many small confrontations/climaxes I would argue that they still follow the curve very well, something that I have hopefully demonstrated in my writing. 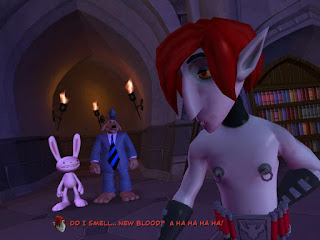 Behold, the nipples of the night. What music they make!
The night of the raving dead concerns Sam and Max´s neighbourhood invaded by zombies. Following their trail to a zombie factory (exactly how these factories work and what economic use there are for them is not something that I can figure out and neither can the scriptwriters) in Stuttgart. There they meet the, ahem, metrosexual vampire Jurgen that turn out to be the antagonist of the episode. He is working on a Frankenstein´s monster type creature and Sam and Max must stop him. This episode has a very strong point of no return when Sam and Max are turned into zombies. This changes the focus of the episode from not just stopping Jurgen but also becoming alive again, granting some extra urgency to the proceedings. Since the episode is self-contained, it doesn´t really set up a point of no return for the season as a whole. That actually happens in the next episode, but let us not spoil that yet. 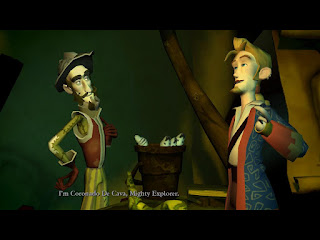 If you do not take care of where you are headed, you may end up a puzzle-obsessed old geezer
As noted in the last installment, the end of the second episode (eaten by a giant manatee) serves as a point of new return for the season. In the first two episodes Guybrush had agency, from this point on the narrative will strongly dictate where he can go and do. He will also find La Esponja Grande, the first major goal of the season. Lair of the leviathan begins with a confrontation just like the first two although it does not have the same faux-climactic quality to it, rather serving as an introduction to the world inside the manatee, inhabitad by bizaroo-Guybrush explorer Dora Coronado Da Cava and his crew. The episode does have an inner point of no return when Guybrush manages to exit the manatee (so to speak) and interogate the crew about a key item. The episode ends with Guybrush being captured and returned to Flotsam to stand trial for pirat-ey misdeeds and spreading the pox of Lechuck. 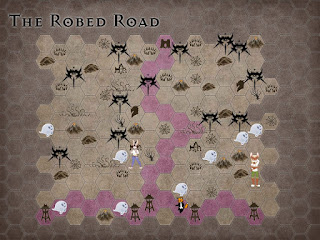 The point of no return for Alex and Adva is the titular couple arriving in the underworld to look for the plant. Although not very strong in my initial draft nor the finished script I do emphasis at several later points that they cannot return home easily, turning the descend into a sort of retroactive point of no return. Inspired by the curse of monkey island I wanted a sort of change in gameplay for the middle of the game. This also serves as an illustration for how dangerous the underworld is. The game changes into a sort of chess-like affair where you can put characters at different tiles to achieve different effects and defeat enemies. The objective of the game is guiding all the dead souls to the safe temple at the top. After winning Alex and Adva arrive at the capital of Hell, slipping in just before the demon attack.

We are fast approuching the confrontation and the climax. Since the resolution is not usually playable (usually, remember walking around the world in Earthbound after defeating Gyigas?) the two last episodes could be said to be somewhat dedicated to the confrontation and the climax, respectivaly. In the next and penultimate installment we will look a little closer on what makes a good ending to a story.
Upplagd av Erik Engström kl. 17:35